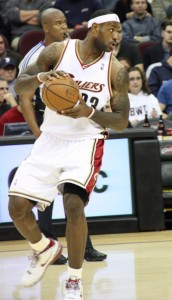 When you talk to people around the league and Clevelanders, they will tell you that Lebron main reason for leaving Cleveland for a bigger market is off the court money. For example, Nike had a clause in Lebron’s contract that will pay him more if he played in a bigger market.

“that clause in his contract expired after his rookie season.”Â Â Chris Broussard from ESPN Magazine said.

Another great article I read today on ESPN by J.A. Adande talks about how Lebron is making more money in endorsement living and playing in Cleveland than “Yankees superstars Alex Rodriguez and Derek Jeter” combined.

“Anyone who still believes you can make it only in Manhattan probably still calls remote controls “clickers.” This isn’t the Walter Cronkite era, when we got our news from men sitting at desks in New York. These aren’t the old Don Draper days, when everything we thought we knew and needed was generated by the ad shops on Madison Avenue.”

Money is important but isn’t what Lebron is looking for at this point of his career. He is looking forÂ  championships and a dynasty similar to the Bulls. Lebron James watched Michael Jordan dominate the league and Lebron wants to be like Mike.

“for me, it is all about winning, it’s not about the market.” Lebron said to NY media.

Building a championship team takes years. It took Michael Jordan six years to win one. Now Lebron is surrounded by a team that is dominating and blowing team after team out and they are excelling in nearly every phase of the game.

“the last time I was in this building[Madison Squar Garden] when LeBron scored 50 and everyone wanted Isiah Thomas’ head, LeBron was asked if he ever considered playing in New York. His answer was this: “No.”

Tonight he ruled nothing out and told the Knicks fans “to have an open mind.” There is no doubt a basis for all this hype, LeBron has been thinking about his options. One of them is surely to play in New York in the future. But right now — and everything can and maybe will change — the needle is firmly pointed toward staying home no matter what anyone says. ” Brian Windhorst said.