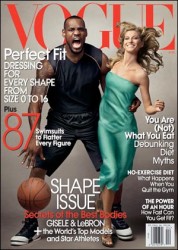 The image of Lebron James with Gisele Bundchen is stirring up controversy with some calling the “photo as perpetuating racial stereotypes. James strikes what some see as a gorilla-like pose, baring his teeth, with one hand dribbling a ball and the other around Bundchen’s tiny waist.”

Magazine analyst, Samir Husni believes the photo was deliberately provocative, adding that it “screams King Kong.” Considering Vogue’s influential history, he said, covers are not something that the magazine does in a rush.”So when you have a cover that reminds people of King Kong and brings those stereotypes to the front, black man wanting white woman, it’s not innocent,” he said.

James told The Cleveland Plain Dealer he was pleased with the cover, saying he was “just showing a little emotion.”

“Everything my name is on is going to be criticized in a good way or bad way,” James told the paper. “Who cares what anyone says?”

One reader of the magazine commented in USA Today saying:

“This cover is very hurtful to the white basketball players. It screams that only blacks can play basketball, be successful and that white women would choose a black man over successful white man. I am boycotting Vogue from now on.”

“He’s a basketball player who is known for his abilities…what kind of face should he be making? He is in his element, whether black, white, or purple, he IS a basketball player. It’s not like they took just some tall black guy and made him wear a basketball uniform and have a blonde jumping up and down for him. Sheesh. People need to seriously get over themselves and stop taking things so seriously.”

Mat Carter of Canada.com said, “Perhaps it’s because we in Canada carry slightly less racial baggage then our southern friends, but to me the criticism is a mite hysterical — not to mention insulting toward James.”