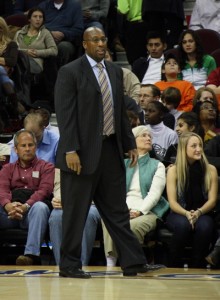 Near the end of Coach Mike Brown’s pregame standup before Clevelandâ€™s 99-89 win over Miami on Saturday, I asked him several questions relating to game plan preparation and his thoughts about various basketball statistics. Here is that interview in its entirety:

Friedman: “Even though you are not a big stat guy, are there one or two key stats that you might look at either after a game or after a series of games in order to track your team’s progress?”

Friedman: â€œWhat are your targets for defensive field goal percentage and points allowed? I know that you could have a high possession game but in general what are your goals in those two categories?â€

Brown: “I like anything below 40 (for opponentâ€™s field goal percentage). That looks beautiful to me. For free throw attempts, if you can keep them below 20 that is pretty good.â€

Friedman: â€œSo, points in the 80s, field goal percentage below 40 and free throw attempts 20 or below for your opponent.â€

Brown: â€œThose are not realistic numbers to have every game and if you are doing that you probably are the best defensive team in the businessâ€”but those are beautiful numbers to me.â€

Friedman: â€œIs that something that you learned from your San Antonio experience with Gregg Popovich? I know that he is a big defensive field goal percentage guy.â€

Brown: â€œItâ€™s kind of funny, because Popâ€™s not a stat guy either. I remember one of the assistant coaches was P.J. (Carlesimo), who is a stat guyâ€”Popâ€™s not. P.J., the first time he was with us in one of the games early in the season, gave a stat sheet to Pop during a timeout, and Pop was like, â€˜I donâ€™t need to look at this to know if weâ€™re not rebounding!â€™ Iâ€™m the same way. Iâ€™m a â€˜by feelâ€™ guy. Obviously, you do look at opponentâ€™s rebounds every once in a while, whether itâ€™s offense or defense, but I donâ€™t dwell on it. I think that a lot of times what you do with stats is if you have a point that you want to show and prove to the team then you break out the stats and throw those out there.â€

Friedman: â€œSo, you feel like you watched the game, you donâ€™t need numbers to tell youâ€”you watched, so you know if your team is boxing out, if they are rebounding, if they are defending.â€

Brown: â€œYeah, you have a general feel. Also, that is part of the reason that nowadays you have whatâ€”16 assistant coaches? (laughs) So, they need something to do, too. So they should let you know if we are doing something right or something wrong.â€

Friedman: â€œDid you see the New York Times article by Michael Lewis (you can find my take on Lewisâ€™ piece here)?â€

Friedman: â€œThe article discusses how Houston General Manager Daryl Morey uses stats. The Rockets look at certain tendencies for Kobe Bryant and then give this real detailed scouting report to Shane Battier about how to guard him, to try to force him to certain areas. As you know, you canâ€™t shut down a great player but you can try to force him to lower percentage areas. Do you not believe in using stats in that kind of way? Do you just go more by feel because you have some idea of the tendencies of Kobe or Wade or whoever the case may be on a given night? Do you look at any of that stuff, like if he takes a one dribble pullup to the left he is shooting this percentage but if he does the same move to the right he is shooting this percentage, so we are going to steer him to his lower percentage area?â€

Brown: â€œTwo things. Not to knock that, because I think it is great to use if you have some solid information, but how many championships has that gotten them?â€

At first I thought that this was a rhetorical question, but after Brown paused for a beat I answered him.

Again, I was with Pop for three years and heâ€™s not a stat guy. In a 10 year span, heâ€™s won four NBA championships. I know that every game, he doesnâ€™t go up to Bruce (Bowen) and say, â€˜Kobe shoots 22% from the right corner and 35% from the left cornerâ€™ or whatever. Itâ€™s a thing that, yes, if you use it the right way it can be helpful, but if you try to use stats too much I donâ€™t know if itâ€™s going to bring you a championship, at least from what Iâ€™ve experienced. We didnâ€™t need those types of detailed stats to win a championship in San Antonio.â€

Brown: â€œThatâ€™s my opinion. On the flip side, I donâ€™t know Pat Riley well but I know that when he was the head coach in Miami he was a big stat guy. They have plenty of interns breaking down stats from every angle in every way. They won a championship. It’s just basically what you feel and who you are. I know, for me, my philosophical approach is (modeled) more (on) Pop’s than anything else.”

If you read Coach Brownâ€™s comments with an understanding and appreciation for how high level basketball should be coached and played, then it is no mystery why he has already led the Cavaliers to the NBA Finals once and why he currently has them on target to post the best record in the Eastern Conference this seasonâ€”even though other teams are considered more fun to watch and despite the amount of attention that has been focused on the kind of basketball statistical analysis that Popovich and Brown do not use. The Popovich approach has worked very well for the Spurs, so Cavs fans should be very happy that Coach Brown is essentially constructing San Antonio East in Cleveland.