That’s Damon Jones and Deion Sanders hanging out doing before the NBA All-Star game. Damon and Deion have a lot in common. They both have loud personalities, they both like attention, they both like to be bold in the area of fashion, both their names start with ‘D’, and both are about of equal value to the Cleveland Cavaliers. 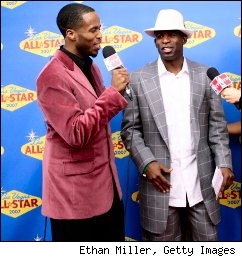 t the upper hand in fashion? In this game, I’m rolling with Deion. I love the icy-white hat coordinating with the equally clean untucked white shirt. It looks tremendous underneath the white windowpanes on the slick gray suit. It’s not just bold, it’s well put-together. Deion’s been doing this for a long time.

Damon Jones, meanwhile, is half-steppin’. The wine-colored velvet blazer is absurd, but the entire ensemble isn’t absurd enough. It’s like, “Yes, I want to be outrageous, but I’m not willing to go all the way with it.” He’s paired it with a simple black dress shirt and simple black pants. Commit to it, Damon, or just get out. I expect better from you.