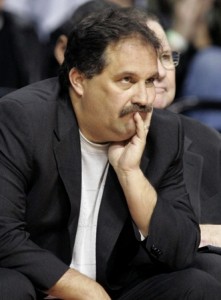 Ok… that was Ben Wallace’s answer to a comment made by Stan Van Gundy yesterday:

“Ben Wallace and Mo Williams fell down more times [in Game 3] than a baby learning to walk.”

Ben Wallace, was not in a good mood. And he was asked for a response to this statement

“Come out there and do something about it,” Wallace responded, “or shut the [expletive] up, is what I tell him.”

Van Gundy is going to get in trouble if he doesn’t stop harrasing the big men in the NBA. He made a similar comment to Shaq earlier in the season.
“I heard his comment.” Shaq said responding to Van Gundy’s comment. “Flopping to me is doing it more than one time, and I realized when I tried to take the charge, as I went down, I realized that that play reminded me of his whole coaching career,” O’Neal said of Van Gundy. “And one thing I really despise is a front-runner, so I know for a fact that he’s a master of panic, and when it gets time for his team to go in the postseason and do certain things, he will let them down because of his panic. I’ve been there before, I’ve played for him.”

Then he added: “Now I see why everybody who plays for him doesn’t like him.”