Are the real Boston Celtics the team that went 66-16 this season or are they the team that lost three playoff games in Atlanta to move within 48 minutes of suffering the biggest upset in NBA postseason history? Are the real Cleveland Cavaliers the team that routed the Washington Wizards in game two or are they the team that Washington ran over in game three? Within the next two weeks or so we will find out who the real Boston Celtics and Cleveland Cavaliers are, because by that time one of these teams will advance to the Eastern Conference Finals while the other team will spend the offseason trying to figure out what went wrong.

Boston and Cleveland split their regular season series 2-2 but you can disregard the first three games because they took place prior to Clevelandâ€™s big trade. Clevelandâ€™s fourth game versus Boston was a 92-87 road loss on February 27, just five days after the trade. It was a back to back for Cleveland and the teamâ€™s third game in four nights, while the Celtics had a day off prior to the game after returning from a five game Western road trip. LeBron James missed the last 4:24 of the first half versus Boston after spraining his ankle but he returned to action in the second half. Needless to say, considering the scheduling, the adjustment period after the trade and Jamesâ€™ injury that fourth game cannot tell us too much about the upcoming playoff series. END_OF_DOCUMENT_TOKEN_TO_BE_REPLACED 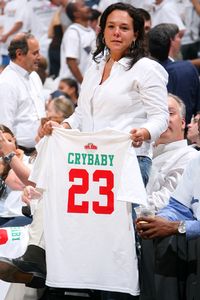 Lebron James was very excited to win the first playoffs series three years ago. That’s when Damon James hit the winning shot against the Wizards and Lebron James tackled and the rest of the players followed.

”My first year I was excited I was able to finally get there,” James said. ”Winning a playoff series was the best thing that ever happened to me at the time.”

This time, the expectations are different,Â  ”Now, every time I work out in the offseason, I am preparing to play until June and into the Finals,” James said. ”I always want my team to know we’re playing to make it into June. That is how I focus myself and make myself a better player.”

This afternoon, the Celtics and Hawks will face off for game 7. The winner will play the Cavaliers likely on Tuesday.Â  The pressure is heavily on the top-seeded Celtics who earned NBA best 66 wins during the regular season.

Last night the Hornets stung the Spurs in the first game of the West semi conference finals in a decisive 102-82 win.

“Things just didn’t go my way,” said Duncan, who offered only a few terse comments in the locker room. “They did a great job. … I played badly, so credit to them.”

“They took away our inside game. Timmy had a rough night,” Parker said. “We need to do a better job to get him the ball and try to get him some shots, basically. Tonight, New Orleans did a good job to take that away from us. That’s not Timmy.”

Detroit Pistons beat up Orlando 91-72 and held Superman, Dwight Howard, to 12 points and eight rebounds and three blocks after scoring 20 points and 20 rebounds in the first round against Toronto.

“We got outplayed badly,” Van Gundy said. “We need to bounce back.”

Reserve forward Darius Songaila was suspended by the NBA today for Game 6 tonight for hitting LeBron James in the face with his hand.

Songaila participated in Washington’s shootaround at its arena Friday morning, before the league announced the suspension.

He made contact with James’ face in the first quarter of Washington’s 88-87 win over the Cavaliers on Wednesday in Game 5. That victory allowed Washington to cut Cleveland’s lead to 3-2 in the best-of-seven series.

Cavaliers fan were excited and ready to celebrate a Cavalier win last Wednesday. That didn’t happen and tonight the Cavaliers will try again.

Reasons to be optimistic about thonight’s game:

1- In the past two postseasons, Cleveland has eliminated the Wizards at Verizon Center

2- The Cavaliers have failed to close at home last year in game 5 against the Nets, and the previous year against the Pistons.

3- The Wizards haven’t been eliminated on the road since 1988, when they were knocked out in the first round at Detroit.

4- Cavaliers in game 5 missed 15 layups and 16 three-pointersÂ  and still lost by just one point.

– Wizards new tactic, Shut up and play:
“We just said, ‘It’s time to stop all the talking.’ A lot of guys were trying to defend themselves as far as this and that. But it wasn’t working,” Jamison said Thursday. “We said: ‘The ultimate change-around is for us to just be quiet and find a way to come back from 3-1 and win the series.’ I think they finally got it.”

Neither DeShawn Stevenson nor Brendan Haywood met with the media after the Wizards’ brief practice and video session Thursday.
– Mike Brown on the Cavaliers Wacky play:
“I don’t know if wacky is the word,” Cavaliers Coach Mike Brown said when asked to describe this series. “The playoffs is a season into itself. You can experience a lot of highs, a lot of lows, a lot of good things, a lot of bad things, and we definitely have run the gamut so far.
– Coach blames self for not calling Ilgauskas’ number
”It was bad decision-making on my part; I didn’t call his number,” Cavs coach Mike Brown said of Ilgauskas Thursday after practice. ”I thought we had some good
looks â€” one look that was a little questionable was probably LeBron’s 3. In terms of Z not getting touches down the stretch, I didn’t call his number, but I’ll live with every other possession we had besides that 3.”

Ilgauskas offered no criticism of what happened, emphasizing that the Wizards played him well.

”It’s hard to get anything in the post because they bottle up and send two people. I had a hard time getting the ball,” he said. ”Usually they have two people on me even when I don’t have the ball, usually someone in front of me and someone in back.”

In 1987, Curry Kirkpatrick, writing for Sports Illustrated, reflected on a memorable 1983 Hawks-Celtic Playoffs fight. Tree Rollins elbowed Danny Ainge; Danny made the mistake of tackling Tree; one tetanus shot and a permanently reduced ability to give anyone the finger later, the conflict passed into legend.

The Boston Herald ran a Tree Bites Man headline the following morning and although some fans chose to believe Danny bit Tree, Rollinsâ€™s reputation was set in stone.

Tree is no stranger to controversy. Leaving Clemson after four years of double-double season averages and joining the Atlanta Hawks, Tree found himself in the middle of a heated debate concerning high school / college athletes and generous (and by generous, I mean illegal) gifts bestowed by recruiting colleges.

Sports Illustrated (SI), in March of 1982, cited Rollins as admitting to accepting gifts and cash from Clemson outside of the NCAA guidelines. Their source for this information was a pre-publication copy of Taylor (Tates) Lockeâ€™s autobiography, Caught in the Net. Locke, head coach at Clemson when Rollins was recruited, left Clemson in 1975 after the NCAA charged the university with 40 rules violations and placed it on a 3-year probation, starting with the 1975-76 season. END_OF_DOCUMENT_TOKEN_TO_BE_REPLACED

The Wizards have tried everything to beat the Cavaliers. I mean everything except playing basketball.

With all the trash talk, hard fouls, flagrant fouls, and fines, the Wizards are facing a possible early summer vacation when they face the Cavaliers tomorrow at the Q.

With a win tomorrow, the Cavaliers, will close out the Wizards for the third straight year

Wizards fans are tired of the loosing. Here is a letter to the Wizards by one of their fans:

“And with this so-called feud between Stevenson and James blown way out of proportion, with the likes of Jay-Z and Soulja Boy drawn into the orbit, things have completely gotten out of hand.Â  It obviously has distracted DeShawn Stevenson to the point where his play has been ineffective, except for one good game in the lone Wizards win.Â  Oh, and by the way, Mr. Stevenson, you think you can keep LeBron in front of you a few times instead of watching him go by on his way to the basket? Just keep quiet and play ball. And Mr. Haywood, who has spent the better part of his time in the NBA underachieving until finally showing some promise this season, who are you to make any comments? I admit, Iâ€™m surprised that you are even here after how last season ended. Prior to this season, the thing you were best known for was fighting with Etan Thomas. Just keep quiet and play ball. And Mr. Arenas, while I admire your candor on your blog, perhaps itâ€™s time to rein it in just a bit so that you can focus on your game and sharing the ball with your teammates. Letâ€™s just say while it was nice to see you try to do your modern-day Willis Reed impersonation the other day, Game 4 was not one of your better outings. Just keep quiet and play ball.”

You can read the full letter here.

Paul Pierce was also fined by the NBA for making a menacing gesture during game 3’s loss against the Hawk.