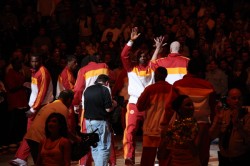 The most important number for the Cavs is their league leading 61-13 record, a mark that all but assures that they will have home court advantage throughout this year’s playoffs (barring an unimaginable collapse in the final eight games). However, there are some other numbers that are also quite impressive and that bode well for the team as LeBron James and company attempt to reach the NBA Finals for the second time in three years and try to win the franchise’s first championship (not to mention Cleveland’s first major professional sports title since the Browns ruled the NFL in 1964).The Cavs own a 36-1 home record, so if they win their last four games at the Q they will tie the mark for the best home record in NBA history, set by the NBA Champion Boston Celtics in 1986. In those 37 home games, the Cavs have outscored their opponents by 14.3 ppg and held them to .414 field goal shooting. Although some pundits question Cleveland’s ability to win on the road in the playoffs-they apparently are unaware of LeBron James’ game five exploits versus Detroit in 2007 or the fact that in the past three years the Cavs have won 10 road playoff games-the Cavs own the league’s third best road record (25-12), ranking just behind the Lakers and Magic in that category. The Cavs are certainly capable of winning at least one road game in any playoff series, which would mean that their opponents would then have to beat the Cavs twice at the Q in order to advance.

The Lakers held the top spot in the NBA for longer than any other team this season but the Cavs roared past them by going 16-1 in March, tying the league record for most wins in a calendar month. The Cavs are currently riding a 13 game winning streak, the longest in franchise history. While the Cavs are peaking heading into the playoffs, last year’s NBA Finalists are not doing nearly as well. The Lakers went 10-5 in March, though to be fair it must be noted that they played 11 games on the road, closing out the month with the first six games of a season-long seven game East Coast swing. The injury-riddled Celtics went 9-7 in March; it is not clear when defensive anchor Kevin Garnett will be fully healthy and the Celtics hardly strengthened their bench by signing point guard Stephon Marbury, who has averaged just 3.2 ppg on .314 field goal shooting since joining the team. Although the Orlando Magic are certainly closing the season on a strong note (12-2 in March, including their current six game winning streak), considering their lack of deep playoff experience it is difficult to believe that they would beat the Cavs in a seven game series.

The Cavs lead the NBA in points allowed (90.9 ppg) and point differential (9.4 ppg) while ranking a close second to the Celtics in defensive field goal percentage (.429). LeBron James attracts a lot of media attention for his scoring and passing-and he fully deserves the praise that he is receiving-but many people are missing the important fact that the Cavs are a dominant defensive team. Of course, James plays a big role in Cleveland’s defense, ranking second on the team in blocked shots and sixth in the league in steals. Those numbers only tell part of the story, though; like many young players, when James first came into the league, he did not understand how to play effective defense either in a one on one sense or from a team defensive standpoint-but now he understands both concepts very well, he accepts the challenge of guarding the other team’s best player on key possessions and he sets a tone that makes it clear to everyone on the team that defense is a top priority. He certainly deserves to be placed on the All-Defensive Team this season.

Last month, I wrote that LeBron James “had a short ‘to do list’ prior to this season.” He has obviously made great strides on defense and he is shooting a career-high .770 from the free throw line. The third item on the list was his perimeter shooting. James is shooting .336 from three point range this year, the second best percentage of his career, but after hovering around the .300 mark until January he shot .400 from long distance in February and .386 in March. At this point, his three point shooting is adequate and certainly seems to be continuing to improve. The one and only weakness remaining in his game is his midrange shot. As I mentioned in the above article, the NBA.com “Hot Spots” charts list red hot, lukewarm and cold zones; James’ only hot zone is still the paint, while he is cold in the midrange areas immediately on either side of the paint. He is actually cold on the entire right side of the court, which may be partially the result of a smaller sample size since he shoots much more frequently from the left side of the court and the top of the key area.

The defensive game plan for elite teams in a seven game series versus Cleveland will continue to be to build a wall around the paint to keep James out and thus try to force him to shoot contested two point jump shots in the midrange area. If James can either make a reasonable percentage of those shots and/or wear down the opposing team by bulling his way into the paint despite their best efforts to contain him, then there is likely no way to beat the Cavs in a playoff series, because they have proven that they will rebound and defend on a nightly basis and their role players have demonstrated that they can consistently be at least adequately productive. Also, the important addition of Mo Williams means that the Cavs have an All-Star level player who can create shots for himself and others; he is a very accurate outside shooter, so his presence will force the defense to spread out and make it much more difficult to keep James out of the paint.