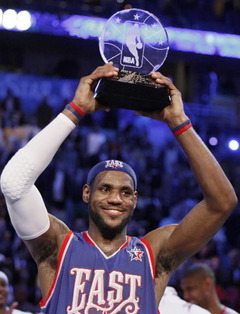 For the fifth consecutive season, James was voted to the All-Star Game and got a career-best 2,940,823 to top all forwards in the Eastern Conference. The Magic’s Dwight Howard led all players with a record 3,150,181 votes. James was second overall and the Lakers’ Kobe Bryant was third with just over 2.8 million. The game is set for Feb. 15 at the US Airways Center.

“I always look forward to is because it is for the fans,” James saidÂ  “They create us and they’re the reason why we have the exposure. Without them there wouldn’t be an All-Star Game.”

The East’s head coaches will pick the All-Star reserves next week.Â  Mo Williams is in contention for one of those spots, but it will be difficult as point guards Jameer Nelson of the Magic and Devin Harris of the Nets are in it with Williams. Zydrunas Ilgauskas was an early favorite but his chances have diminished with his recent ankle injury.

The Cavaliers currently hold the top spot in the East and if they continue to hold that spot by Feb 1st, Mike Brown and his staff will coach the East.