Ben Wallace received 14 stitches for an injury he received playing catch with a football during the All-Stars weekend. He was treated today at the Cleveland Clinic Sports Health for removal of additional glass pieces from his arm. He is listed as questionable for tomorrow’s game against the Raptors.

“Cavaliers guards Delonte West (wrist) and Tarence Kinsey participated in today’s practice and travel with the team to Toronto. The Cavs are listing Kinsey has questionable and West as doubtful, although teammate LeBron James said he thought West would be in uniform for the game.

Cavaliers guard Sasha Pavlovic had the cast removed from his ankle today and is now wearing a walking boot. He will continue his rehab and will not accompany the team on its trip to Toronto and Milwaukee. His status will be updated as appropriate.” 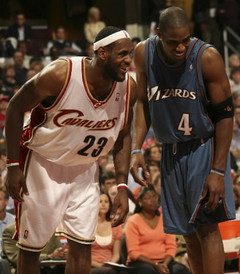 The trade deadline is coming this Thursday and Danny Ferry made it known that the team and the coaching staff are happy with the current roster.

Cavs GM Danny Ferry told Marc Stein on Sunday night that he’d “be surprised if they did anything at this point.” However, when Ferry made the deal for Szczerbiak, one of the big selling points was that the Cavs could use the contract as an asset this year.

A deal for Antawn Jamison would give the Cavaliers the size they need at the 4 spot and a dynamic scorer. The Wizards are one of the worst teams in the NBA and they will not get much better when Gilbert is back. The Wizards owner is wasting money on a bad team and dealing Jamison will put them slightly below the cap next year.

However, Jamison might give the Cavaliers what they want now and maybe next year. He is 32 now and has 3 years left on his contract after this season. Can he stay healthy and continue to play at such a high level for the next three years?

With the current economic downturn, it makes you wonder if Cavs owner Dan Gilbert is feeling the heat. The Cavaliers are paying close to $19 million in luxury taxes this year. But next year they will go under the luxury-tax threshold if they let Wally walk.

Seeing Lebron James in No. 6 jersey has become somewhat standard for James. This is Lebron’s Team USA number which James has said was the best experience of his career. He has been spotted at the Q with No.6 as well during practices and fans were puzzled a bit when James warmed up for the game wearing a jersey with the No.6 in a late December game.

Often when he gives autographed jerseys as gifts to friends or special causes these days, he’ll sign an Olympic No. 6 jersey.

So indeed, he is No. 23, but No. 6 is part of him too. Someday, there’s a chance it could be his number all the time. ” Brian Windhorst said.

“It’s interesting to think about. I feel like 6 is my number, too,” James said about the prospect of switching.

“If the NBA retired 23 because of Michael (Jordan) like baseball did with Jackie Robinson (42), I would definitely switch it. Maybe I would someday, we’ll see.”

Lebron James just announced that he will compete in the 2010 slam dunk contest in Dallas, Texas.

During the T-Mobile Rookie Challenge game Friday night, Kenny Smith talked Lebron into competing in the slam dunk contest and apparently it worked.

The 2010 NBA All Stars will be held in Dallas. The 59th NBA All-Star Game will be played on Sunday, Feb. 14, 2010, at the new Dallas Cowboys Stadium in Arlington, which will have a seating capacity in excess of 80,000. The T-Mobile Rookie Challenge and NBA All-Star Saturday Night festivities will take place at American Airlines Center, home of the Mavericks.

James will dedicate a state-of-the-art playground at the Robson Boys and Girls Club of Phoenix. Last season, James and his foundation teamed with State Farm on a similar project in New Orleans, where they installed at St. Bernard Recreation Center, devastated by Hurricane Katrina.

“A playground is an important place for kids to play, have fun and hang out with friends and family,” said James, who won his second All-Star MVP last year in New Orleans.

James has done similar charity work in his hometown of Akron, sponsoring a popular bike-a-thon and providing book bags and school supplies to needy families.

Brown’s comments were directed to referee Joey Crawford after he called LeBron James for a foul on Danny Granger with 0.1 seconds left in a 95-95 game. Granger hit the first free throw to win the game for Indiana.

“I cannot imagine another worse call than that. LeBron was between his man and the basket. He went up in the air when the ball was tipped, and for that official to predetermine his call was awful,” Brown said. “It was awful. That’s why we lost the game. I never blame the officials. But that call was a predetermined call and he should have swallowed his whistle on it. But he did not.

“I don’t care if I get fined. It is what it is. I saw the two plays, a bad call determined the outcome of the game. If they want to fine me for telling the truth, fine me.”

Brown didn’t discuss his comments last night before the Cavaliers faced the Suns.

The Cavaliers pride themselves on being a “no-excuse” team, but Brown said he will continue to stand up for his team when he feels it’s necessary.

“But I have to be careful how I say it so it does not impact the team in a negative way,” Brown said. “It is a fine line, but if we really are a no-excuse team, which we have been, then I’ve got to make sure I’m leading us down that path.”

Cavaliers girls Cheney Larschied was among the nine other NBA dancers selected to appear in the 2009 Sports Illustrated Swimsuit issue!

â€œIt is such an honor to be able to represent what I believe to be the best dance team in the NBA and the best team,â€ said Cheney. â€œDancing in Cleveland is so much fun and the fans are really supportive. Thereâ€™s so much excitement all the time.â€ 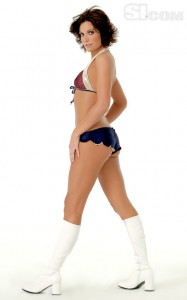 You can see more photos on SI.com here. Also, you can watch the following video of her photo shoot:

The usually composed coach Mike Brown stormed out of the locker room in disgust over a foul Crawford called on LeBron James with .1 of a second left that sent All-Star Danny Granger to the line for what turned out to be the game-winning free throw and cost the Cavaliers their first back-to-back loss this season.

“That last call, on the run, is the worst call that I have ever been a part of,” Brown said. “I cannot imagine another worse call than that. It was an awful call and for him to take away a basketball game from a team with .4 seconds on the clock is irresponsible.”
With 0.8 seconds left, the Pacers were up 95-93. The Cavs tried an alley-oop play to James off the inbounds pass. Granger stepped in front of James, who couldn’t catch the ball but drew the foul, and then Lebron made both free throws to tie it at 95.

After a timeout, the Pacers ran the same play. This time, with Granger cutting to the basket and James chasing, Granger got the call.

Mike Brows was so upset during the post game interview and repeatedly criticized the officials and possibly setting himself up for a league fine.

“I don’t care if I get fined. It is what it is. I saw the two plays; just a bad call determined the outcome of that game,” Brown said. “If they want to fine me for telling the truth, fine me. This isn’t me. I never do this.”

“The last call against me was not questionable at all,” James contended. “No contact was made. The pass was short. You couldn’t go to the rim. I was able to get a hand on it.”