Lebron James announced tpday that he would be participating in a venture from MSN that will portray the basketball phenomâ€™s journey from humble beginnings to athletic fame and fortune, all in a storybook format geared toward children and teens.

LeBron.msn.com will give people the opportunity to explore LeBronâ€™s road to athletic achievement, his dedication to basketball and academics, his devotion to his team, friends and family, and his role as a community activist and peopleâ€™s champion. The site includes interactive content, including a blog, that will provide fans with the opportunity to share his experiences and encouraging messages to users all across the world. 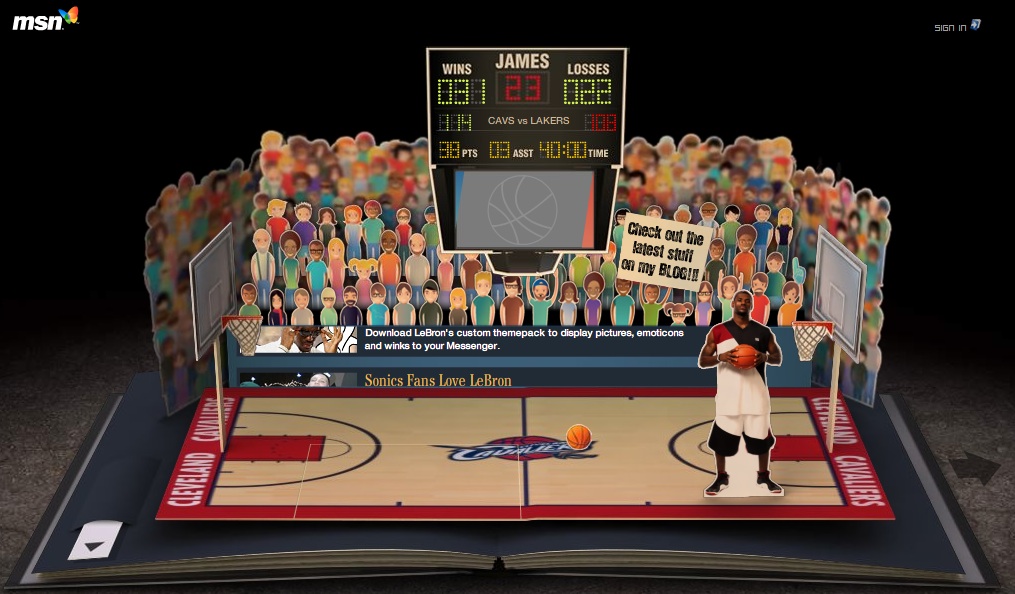 James is hoping the innovative website will motivate youngsters worldwide with positive messages of encouragement and his own story of perseverance.

“I’ve always wanted to have a place where kids can see all aspects of my personality – where I can really talk with them about where I came from, what I do, what I have achieved in my life and what my goals are,” James said via telephone from Las Vegas, site of the NBA all-star festivities. “Kids can follow me on a day-to-day basis, and I want to inspire them.”

With a mouse click, people can watch videos to learn more about James’ life on and off the basketball court. There are also places to enter contests; download pictures and other images of James; check on his latest statistics and see how the Cavaliers are doing.

But the website’s primary intent, James said, is to help educate youngsters through activities and challenges.

James said he had no plans to talk to Cleveland management about making a deal.

“We haven’t really talked about that,” he said. “I think right now our team has been very successful, not where we might have wanted to be but we finished up the first half on a good note. I haven’t gotten involved in anything, talking about trades or deadlines or anything like that.”

According the the New York Daily, Malik Rose could be traded to the the Cavaliers because of Rose’s relationship with Cavs GM Danny Ferry, coach Mike Brown and assistant coach Hank Egan. Rose was with the aforementioned trio in San Antonio.

â€œI have it on excellent authority the Cavaliers â€“ desperate to relieve LeBron James of his playmaking-for-others-and-himself obligation, and transform him into an open court, post-up receiver â€“ called the Nets to voice their fondness for Kidd.”

The Lakers are interested in Kidd too. They had offered a couple first-round draft picks and several expiring contracts for Kidd. Chris Mihm, Aaron McKie.

The New York Daily News reports that there are whispers about the Knicks making a play for Cleveland power forward Drew Gooden which will include other players for salary-cap purposes.

Scottie Pippen is attempting a comeback and he’s targeting the Cavs as a potential destination.

â€œI think there’s an opening for me in Cleveland. There may be an opportunity there for me at the point,â€ Pippen said Friday. â€œI know they’re a little young in that area and have a lack of experience, and I think that’s an area where I could help them as a team. I will pursue it.â€

Bibby to Cavs?
The Cleveland Cavaliers and Sacramento Kings were discussing a trade several weeks ago that would send point guard Mike Bibby to the Cavs, but sources indicate the talks are long dead.

Larry Hughes not happy?
Larry Hughes is unhappy in Cleveland and looking to be traded. He privately been grumbling about the way heâ€™s used, and he is upset because it isnâ€™t the situation he thought he was signing up for when he left the Washington Wizards.

Shaquille O’Neal takes on LeBron James and then battles Dwight Howard during practice.[youtube]AVsdBtRi7wg[/youtube]

Zydrunas Ilgauskas did not travel with the team the past two games while he tends to personal matters.

According to a Lithuanian newspaper, Ilgauskas’ wife Jennifer is expecting twins and that might be the reason he stayed home and didn’t travel with the team.

“Zydrunas pulled out of the 2 NBA games not because of health issues but personal issues. Perhaps this had something to do with his wife Jennifer who’s expecting twins.”

The New York Daily News reports that there are whispers about the Knicks making a play for Cleveland power forward Drew Gooden.

“A potential Frye-for-Gooden deal would have to include other players for salary-cap purposes. Gooden would give the Knicks a rugged power forward who can guard big men. David Lee has emerged as an elite rebounder, but he struggles to defend power forwards and small forwards. Frye is a big man who can knock down a shot, which is what makes him attractive to Cleveland. However, the Cavs would prefer to trade for a point guard.”

Just when Z was beginning to hit his stride the Cavaliers center did not travel with the team to Utah today.

He may miss Cleveland’s final two games before the All-Star break because of personal matters.

Ilgauskas did not practice as the Cavaliers prepared for a two-game trip to play the Jazz tomorrow and the Los Angeles Lakers Thursday before the N-B-A’s regular season pauses for All-Star weekend in Las Vegas. 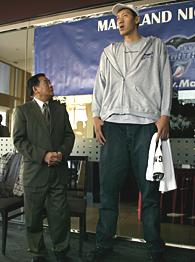 Craig Lyndall from BC SportsÂ writes “I know it sounds like a load after last season’s unofficial rules, where if you breathed near LeBron a foul was called. But pay attention when I tell you that something is going on.”

Apparently the Cleveland Cavaliers and coach Mike Brown feel the same way too. Brown, a coach who is known for not showing too much emotion, has amassed three technical fouls in the last few games. It probably isn’t all that coincidental that this realization coincides with games against the Miami Heat, where Dwyane Wade is still getting some serious foul-calling benefit of the doubt.

And Mike Brown is now so sick and tired of the non-calls that he is shipping videos of offending circumstances to the league offices.

I say good for Mike Brown. Especially in the Miami Heat game, LeBron was taking shots from lots of guys and not getting calls. This play, in particular, LeBron scores the layup, got hit in the face by Alonzo Mourning and nothing was called.
Now don’t get me wrong. I really like the new rules about complaining about whistles. Even as a Clevelander, the LeBron face was starting to become infamous as he was whining more and more about every call. The new rules have reduced these moments almost to non-existence.

But there has to be a balance where a great player like LeBron can get some of these calls when he is blatantly hacked. We know the referees are capable. After all, Wade is still getting them.”