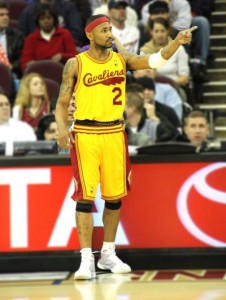 A 6’1 stud from Jackson Mississippi, Mo Williams, is now playing for his third team in his brief six year NBA career. He was drafted in the second round (47) of the 2003 NBA draft by the Utah Jazz. He averaged 5 pointsÂ  and 1.3 assists per game in his rookie campaign. The next year Mo was signed by the Milwakee Bucks as a free agent and he averaged 10.2 points per game and 6.1 assists per game. He was coming off of the bench, behind guard T.J. Ford, but was still able to show his flare for the dramatics. In a game against the Indiana Pacers, in which the Bucks had trailed the entirity of the game, Williams took the ball the length of the floor and sank a 30 foot jumper as time expired to give his team the 103-102 victory.

The next season is when Mo had his first legitimate opportunity to shine, when he was inserted into the starting lineup following a trade that sent T.J. Ford north of the border to join the Raptors. Mo took the bull by the horns and ran with it. His averages exploded to 17.3 points and 6.1 assists per contest. He even recorded his first career triple double in a game against the Miami Heat in 2006 with 19 points, 11 rebounds, and 10 assists. This high performance rate followed him the next season, 17.2 points and 6.4 assists and landed him a massive six year $52 million deal.

Things were looking just dandy for Mo. He was a prolific scorer, an exceptional floor general, and he walked around with a heavy wallet, but this was all on the surface. There was an abundance of turmoil within the Bucks locker room. The team had been struggling with losing records on top of slight friction between the players.Â  Micheal Redd, the Bucks All-Star and Olympian, was becoming somewhat frustrated with the rising star. Redd believed that Milwaukee was his city. Come on, he had already ran out one of the best shooters in NBA history in Ray Allen. He was not about to have Mo Williams dethrone him as the “King of the Court.” So it was inevitable that Mo had to be traded and what a blessing it was for Cleveland fans.

Cleveland aquired the point guard on August 13, 2008 in a three team deal between the Cavs, Bucks, and the Oklahoma City Thunder. The Cavaliers sent Damon Jones to Milwaukee and forward Joe Smith to the Thunder. “Aquiring Mo strengthens our nucleus of players for both the short and long term. He is entering his prime NBA years and will be part of the foundation of our future success,” said by Cavs general manager Danny Ferry. The true “King of the Court” LeBron James has never had a teammate average 17 points per game and that is exactly what he got in Williams.

In Williams first season in Cleveland he has done absolutely nothing but astonish. He has averaged a career best 17.8 points per game along with 4.1 assists. Mo posted his career high in scoring with 43 over the Sacramento Kings only to top that soon after with 44 over the Phoenix Suns. Mo was named to his first ever All-Star team this season, maybe a sign of things to come. The team chemistry now is amazing whether the team is dancing together on the bench or posing together before games for their invisible camera. Mo Williams to Cleveland has been an absolute success so far leading to the NBA’s best record (66-16) but will it deliver what everyone in Cleveland is starving for, the Larry O’Brien trophy? Only time will tell.