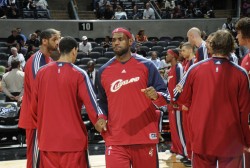 Another year for Cleveland’s sports fans. As the Browns crawl their way to another disappointing season, and Indians rebuild (again), Tuesday can’t come soon enough for Cleveland.

The Cleveland Cavaliers will open their season on Tuesday against the Boston Celtics on National television. So let’s take a look at what local and national media are saying about the Cavs:

What national analyst are saying about the Cavaliers?

Jon Barry, ESPN: The addition of Shaq, provided he’s healthy, gives Cleveland a viable post-up option to take pressure off of LeBron. The Cavs will roll through the regular season.

Chris Broussard, ESPN The Mag: Last year’s collapse in the Eastern Conference finals only made LeBron hungrier and more willing to expand his game. Now, opponents can expect to see him in the post more. Scary. And look for a resurgence from a truly motivated Shaq.

Doug Collins, TNT: I think Shaq will help on that front line. They really got hammered inside last year. They had no answers for Dwight Howard. These are two very dynamic personalities that you’ve put together. Also with Jamario Moon and Anthony Parker, they’ve got some size on that team.

Reggie Miller, TNT: I think the loss of coach John Kuester to Detroit to take over the Pistons … he was the offensive guru – puts a lot of pressure back on head coach Mike Brown … Is this offense going to jell without Kuester being there?

Jalen Rose, ESPN: LBJ is the best all-around player in the game. He probably could average a triple-double. Shaq wants his fifth ring. Mo Williams can play with the best of them at the point. Jamario Moon and Anthony Parker will have perimeter impact.

Chris Sheridan, ESPN.com: Opening night at home against the Celtics should be a blast. Let’s see how the teams’ difference in depth plays out in that opener and over the course of the season. Right now, I rank the Cavs a solid second in the East. Boston just looks better.

Chris Webber, TNT: You have Shaq who’s a dominant post player, and you have an All-Star center in big Z coming off the bench to spread the defense and change the coverages. Now you have a guy who can shoot the jump shot, a guy who can offensive rebound.

Brian Windhorst: Brian thinks the Cavaliers will go all the way and bring the championship to Cleveland. “If they stay healthy it could be their time”

Bud Shaw predicts the Cavaliers to win the championship. “Just another Cleveland championship”

Terry Pluto picks the Cavaliers to win it all and bring a championship to Cleveland. “For once, I think right will win out for Northeast Ohio fans”

Mary Schmitt Boyer thinks the Lakers will win it all. “Cavs got better, but so did the Lakers”

Once thing Cleveland sports writers have in common: it will be a Lakers vs Cavaliers finals this time.

David Friedman:Â The Cavaliers posted the best regular season record in the NBA in 2009 and followed up that effort by making a series of personnel moves which essentially resulted in them swapping Ben Wallace and Sasha Pavlovic for Shaquille O’Neal, Anthony Parker and Jamario Moon; the CavaliersÂ also acquired Leon Powe, who is trying to recover from a serious knee injury but may be available in time for the 2010 playoffs. The Cavaliers will win at least 60 games and should be considered the top contender to capture the Eastern Conference title.

Michael Granito: The Cleveland Cavaliers made a big splash this year with trading for Shaquille Oâ€™Neal. With this move, the Cavs have 2 of the best centers on the team with Shaq and Zydrunas Ilgauskas. With JJ Hickson recovering from injury, and Anderson Varejao happy with a new contract, the Cavaliers have a formidable front court. The question remains in the backcourt, especially with the problems that Delonte West has had in the offseason. If West does not contribute, the Cavaliers have signed veteran Anthony Parker to play in his spot. Parker is a taller, stronger version of West, and is known for his tough defense.

In the end, the Cavaliers need all players to contribute, especially Delonte West. If West to keeps a positive attitude throughout the season and stays out of trouble, then the Cavaliers are ready to make another deep run into the playoffs.

Tariq Ali: Last year loss made this team and organization hungrier. Expect another MVP performance from Lebron James. Shaquille will surprise everyone and play with purpose. Z will be huge off the bench and Mo will have an All-Star year and expect him to show up in the playoffs this year. Expect Delonte West to put all the issues he brought in the summer away and be a huge contributor. This season will belong to the Cavaliers.