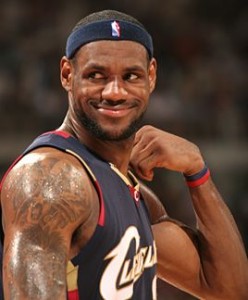 Teams are clearing their books to prepare for the summer of 2010 which is shaping up to be the most prolific free-agent season in NBA history. That summer will feature most of the 2003 class including our own Lebron James.

Lebron potential availability is fueling the media. The purpose of this post is to keep up with contract facts and keep fans updated with some of the articles and stories about this subject.

Some facts Cavaliers fans and other wishful NBA fans:

“Currently, the Cavaliers are in best shape to win a championship with Lebron. The owner and management are committed to building a championship-level team for years to come.

“For LeBron it is about more than just dollars,” Cavs General Manager Danny Ferry said. “As an organization we have committed to building a championship-level team for years to come. There’s a lot of attention and speculation about his future. LeBron has conveyed that he enjoys playing and living in Northeast Ohio.”

“Every day it seems like [the media] has me going someplace else,” James said two weeks ago when the Pistons traded Chauncey Billups, significantly clearing their books for 2010. “I’m very happy here, I have said that over and over.”

James made his strongest comments yet on the speculation at a rally encouraging people to register to vote last month when he said: “I love you, Cleveland . . . I love Ohio and I’m not going anywhere.”

“When I decide to make that decision, it is basically to put me in a position where I feel like I can win multiple championships,” James said before scoring 31 points in a victory Tuesday at New Jersey. “If it’s staying here, then I will be here. If it’s moving elsewhere, then I will have to look at all my options.”

The summer of 2010 is not only the summer of Lebron. The following players will be available as well:

Where will Lebron James be after 2010?

Media Coverage Around Lebron James 2010 Contract:
Subscribe to our newsletter or RSS feed to get full coverage of the “Summer of Lebron”