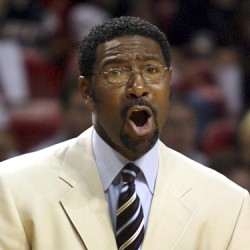 Only 17 games into the season and another team pull the trigger and fire their coach. Today, the Toronto Raptors fired coach Sam Mitchell one day after an embarrassing (132-93) loss at Denver.

“Obviously, last night’s game was just an absolute kick to the gut,”Â General manager Bryan Colangelo said. “When you look back, it’s a culmination of things. Expectations are high. We want to win.”

In four-plus seasons with the Raptors, Mitchell led Toronto to a franchise record 47 wins and the Atlantic Division title and went 156-189.

“I have a lot to be thankful for, they really gave me the opportunity to have a career in coaching, something I always wanted to do after I played,” Mitchell told Canadian sports network TSN. “So yeah, it’s a disappointment that I really wasn’t given the chance to finish what I started, but you know what, I feel like I accomplished a lot of good things. I think the players that played for me all got better.”

Assistant coach Jay Triano will coach the Raptors for the rest of the season.