The Los Angeles Lakers invade the Q on Thursday night with Kobe Bryant in toe.Â  The Lakers are actually playing pretty good basketball right now and have won 6 of their last 7 with a 15-9 record in the Pacific division.Â  Certainly playing better than the Cavaliers who are 11-15 after the embarrassing loss to the Knicks.Â  The Lakers are of course led by Bryant who is second in the league in scoring at 26.8 PPG.Â Â  For a complete look at the Lakers click below.Â

DidÂ we reach the lowest point of the season yet? I sure hope so because this was the ugliest and the most embarrassing game for the Cavaliers.

At the game, one fan held a sign reading: I am at the last game Isiah ever coached.

This should give you an idea of how bad things are at the Knicks world.

Several Cavs joked in the locker room that they should wear helmets in case the fans start throwing stuff on the floor. I guess that explains why the players didn’t want to play tonight!!!

LeBron James had 32 points, eight rebounds and six assists. Drew Gooden was the only other player in double figures with 11 points.

The New York Knicks host the Cleveland Cavaliers tonight.Â  The Knicks are led by Jamal Crawford, 18.4 PPG, 2.8 RPG and 4.5 APG; Zach Randolph 18.5 PPG, 10.6 RPG and 2 APG and Stephen Marbury who has returned to the line up since the death of his father.Â  It is safe to say the LeBron and Marbury are not friends.Â  LeBron recently told us that he would not want someone like Marbury on his team.Â  The Knicks have a lot of talented players but canâ€™t seem to put them together as a team.Â  They enter tonightâ€™s game with a 7-17 record in the Atlantic Division.Â  The Cavs are 11-14.Â  For a complete look at the Knicks click below.

All that happend with the help of Devin Brown and Zydrunas Ilgauskas who scored Cleveland’s first six points in the second overtime.

“We concentrated so much on LeBron, we forgot about Zydrunas,” Milwaukee coach Larry Krystkowiak said. “When he shoots the ball like that, he’s tough to stop.”

“Every win is good for a team, especially with our struggles lately,” Lebron said. Lebron ledCleveland with 31 points

James became the youngest player in NBA history to reach 9,000 career points. He reached the plateau at 22 years, 352 days. James, who entered the game with 8,997 career points, took the record from Lakers guard Kobe Bryant, who was 24 years, 127 days old when he reached 9,000.

“It’s an accomplishment,” he said. “It is the individual hard work I put in during the summer time. It translates into what I do now on the court during the season.”

Reaction from local media:
– Cavs grind out a victory (Akron Beacon Journal)
Double OT win is ugly, but no one will protest

– Cavs drop Bucks in double overtimeÂ (Cleveland Plain Dealer)
The Cavaliers were in need of a spark after lackluster play led to eight losses in their past nine games.

Reaction from Milwaukee media:
– Bucks let opportunities to win slip away (Milwaukee Journal Sentinel)
Another one fell into the “woulda, coulda, shoulda” category Monday at Quicken Loans Arena, where the Bucks were kicking themselves after a 104-99 double-overtime loss to the Cleveland Cavaliers.

The Cavaliers will take on Michael Redd and the Milwaukee Bucks this evening at the Q.Â  Redd is averaging 23.7 PPG, 5.3 RPG and 3.8 APG and is looking to pick up where they left off when they last visited the Q beating the Cavs 111-107.Â  For a complete look at the Bucks click below.

Before the Cleveland Cavaliers take to the Quicken Loans Arena floor to battle the Milwaukee Bucks on Monday, 27 students from Howland High School will have already been there.

After auditioning in October, the schoolâ€™s chamber choir will sing the National Anthem before the game tips off at the Cleveland arena at 7 p.m.

â€˜â€˜Weâ€™ll take center court before tip-off, and Iâ€™ll give students a pitch on my pitch pipe, and theyâ€™ll sing it a capella,â€™â€™ said Anjanette DePoy, high school choir director.

According to DePoy, a promotions manager â€” also a Howland alumni â€” contacted her and asked if theyâ€™d be interested in an audition. After taking a week to prepare, they sang the National Anthem for him in September, and the choir found out in October that theyâ€™d been picked to perform.

Though their seats will be in the nosebleed section, said DePoy, the choir members will stay for the game, which is sold out. But they wonâ€™t be the only ones from Howland there; about 90 in all, including parents and other students, will travel to Cleveland to watch.

â€˜â€˜I have a lot of basketball players in the choir, so we have quite a few who are excited to see the Cavs and LeBron James,â€™â€™ said DePoy.

â€˜â€˜Even Usher, because we heard he comes to all the home games.â€™â€™ 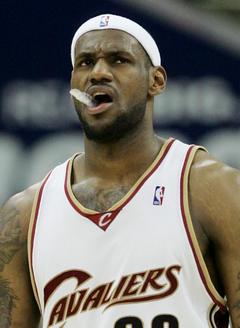 The Cavaliers are not playing anywhere like a conference champions. Their free fall continues with poor defensive effort. This time, Mike Brown is taking the blame on himself.

‘I’m just as much to blame about our defensive liabilities as the players,” Brown said .

”That’s something that has to start with me and end with the players.”

Brown said the letdown started in training camp when most of the time was spent on offense instead of working on defense.

”The players are going to follow the lead you give them,” Brown said. ”And we focused a lot on offensive.”

“The bottom line is there are three areas that hurt us. The first one is fast break points; giving up 35 fast break points and I think 18 in the second quarter. Second thing is offensive rebounds. They hammered us on the offensive glass, which gave them extra possessions. That last things was turnovers. We had 19 turnovers. Those three areas hurt us tremendously.” Brown said.

LeBron James finished with 21 points, including a 12-point first quarter, going 6-8 from the field.
He is three points away from 9,000 career points.

Drew Gooden recorded his 10 double-double of the season with 21 points and a Cavalier-high 10
rebounds.

Andre Miller scored 20 points to go along with five assists.

– Sixers top Cavaliers 92-86 by Branson Wright
LeBron James once warned the opposition about the upcoming Cavaliers’ success once everyone returned back to health. But the Cavs have been so disappointing in their past two games that now James warns his own team.

The Philadelphia Sixers come to the Q tonight to take on the Cleveland Cavaliers.Â  The Sixers are 9-14 this year and are led by Andre Iguodala who is averaging 18 pts, 6 rebounds and 5 assists a game.Â  To get a preview of the Sixers click below.