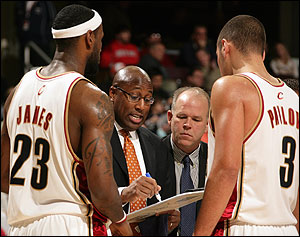 After rumors of Mike Brown being on the hot seat, the Cavaliers General Manager Danny Ferry extended the coach a new 2-year contract extension that will keep him until 2010-11 season.

â€œMike Brown brings his high character, work ethic and talent as a coach with him to work every single day. He has been, and will continue to be, important to our continued growth as a basketball team as we work towards a championship,â€ said Ferry. â€Dan Gilbert saw this in Mike Brown on his 1st job interview two and half years ago and it is evident today more than ever.â€

â€œWhile the stats show that Mike has been the most successful head coach in Cavaliers history, it is his great leadership and his un-flinching focus on our core values and identity that continue to make him the right guy for the job.â€

Do you think Mike Brown deserves the new contract?