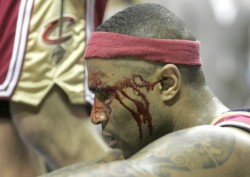 The Cavaliers made some defensive adjustment that seemed to actually work. They were right in the game despite VERY poor shooting from everyone including Lebron James. The Cavaliers were able to limit Lewis and Turkoglu and reverted to fouling Howard, who beat the odds, shot 14-19 from the free throw line, well above his normal percentage. Hedo Turkoglu shot just 1-11 from the field but he made 11 of 12 free throws to finish with 13 points in addition to playing an excellent floor game (10 rebounds and seven assists).

Cleveland held Orlando to .429 field goal shooting in this game and that would normally be a winning number–except for the fact that the Cavs shot even worse than that (.372) and committed 15 turnovers, several of which were “unforced errors”.

“Despite some of the numbers we gave ourselves a chance,” coach Mike Brown said. “Our defense gave us a chance.”

If the Cavaliers want to win this series, players other than Lebron need to start making shots. Mo Williams scored 15 points but shot just 5-16 from the field. Williams is shooting a miserable .321 from the field versus Orlando. Delonte West scored 12 points on 5-11 field goal shooting and he is shooting just .419 from the field in this series. Zydrunas Ilgauskas had just nine points on 3-10 shooting, he attempted 3-three-points shots and missed all. Now he is 2-11 from behind the arc (this need to stop). No other Cav scored more than four points!

“History says the team that wins Game 3 in a tied series ends up winning the whole thing most of the time. But that statistic wasn’t needed Sunday night. The naked eye is enough to tell the direction the Eastern Conference Finals appear to be going. The Orlando Magic just seem to make the Cavaliers look like the underdog, their top-seed status and history-making regular season simply notwithstanding. The Magic outplayed the Cavs again in Game 3, winning, 99-89, to take a 2-1 series edge. The Cavs now need three wins in the next four games to reach The Finals. The Magic seem better equipped. … Unlike during the regular season and first two rounds of the playoffs when his teammates constantly rose to his aid, it is not happening against the Magic. Mo Williams, Delonte West and on Sunday Zydrunas Ilgauskas just aren’t delivering. With much less margin for error, the recipe isn’t working.” Brian Windhorst of the Plain Dealer said.

The Magic have shot down every Cavalier other than James.

For the Cavs to win tomorrow, they need to cut down on the sloppy play and cutdown the turnovers. Mo, Z, Delonte need to start hitting shots and need to get some production from the bench. If the Cavs can steal tomorrow’s game, then this will turn into a three game mini series, two games are played in Cleveland.