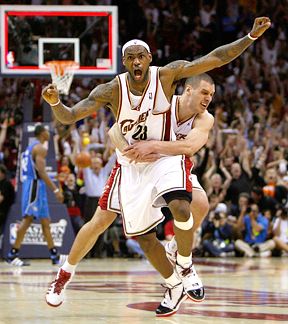 The Cleveland Cavaliers stormed out of the gate yet again as they often do at the Q last night looking to even the series and get the momentum back on their side, and they started early taking a 30-16 lead after only 1 quarter.

The crowd was jumping and it seemed the game 1 let down was well in the past and the Cavaliers that had simply steam-rolled thus far through the playoffs were back on track.

The Cavs had figured out how to contain Dwight Howard, they were putting him at the free throw line (4-8) rather than watching him tear the shot clock down with a thunderous dunk. LeBron James was taking it straight to the rim, as if he was not to be denied.

Sasha Pavlovic, after suggestion by LeBron James to coach Brown, was playing key minutes and delivering both defensively and offensively by putting down 9 points, which had already out numbered the entire Cavs game 1 bench production(5). At one point in the second quarter the roof of the Q was about to come off as the Cavaliers amassed a 43-20 lead.

Then slowly the Magic begin to hit one three, two threes and here they come and they had cut the lead down to only 12 by halftime. Then here it came, thatÂ  punch in the gut, that no pro sports championships since 1964 feeling began to arise.

The Magic’s 16Â  point comeback in game 1 left an eerie buzz in the air,and it was an almost scare of is the same thing going to happen. It only grew worse as the 3rd quarter progressed. The Magic won the 2nd consecutive 3rd quarter 26-21 (30-19 game 1) and by the start of the fourth the once 23 point Cavs lead was down to 7. I began to wonder myself what is happening here? Where are you Mo Williams (6-19 game 1, 7-21 game 2), this is the stage where you prove them wrong for waiting until after injuries to make you an All-Star.

The once ecstatic Q was becoming deadly silent, the fans were wishing the seconds off the clock as the Magic creeped closer and closer. Then with 48 seconds left in the game Hedo Turkoglu nailed a 3 pointer that tied the game at 93.

LeBron James answered with a strong drive to the basket with everyone thinking an And1 just occured but no James had been called for traveling. Then Hedo “MJT” Turkoglu hits a 12 foot jumper with 1.0 second left to put the Magic up 95-93.

It seemed that the Magic had done it, came to Cleveland (43-2)Â  and taken a dominant 2-0 lead heading back to their homecourt, when the basketball gods shined down on LeBron James.

With merely enough time for a catch and shoot, Mo Williams waited as LeBron made an inside cut to create a little space from Turkoglu, tossed him the ball at the top of the key, LeBron caught,turned, faded and IT’S GOOD!!!! LeBron James hit the 3 pointer as time expired to tie the series and possibly ressurected the Cavs momentum if not their season all together.

James finished the game with 35,Â WilliamÂ despite poor shooting had 19 including 8 in the 4th quarter. Zydrunas Ilgauskas and Delonte West both added 12.