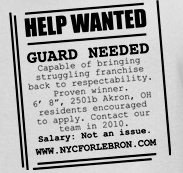 New York fans are desperate and sick of loosing. This is their seventh straight loosing season with a 10-51 record. They are looking for help and they realized it won’t come from Isiah or anyone form the Knicks organization.

“So as New Yorkers we have to put matters in our own hands. ” the website, nycforlebron says.

They are collecting money and selling merchandise to raise funds to buy Lebron “a New York gift basket (his own suite at Yankee Stadium, additional salary, Gloria James courtside seats, Ferrari, etc.) if he opts out of his contract in July 1, 2010 and comes to New York.”

If you are in Cleveland or just an NBA fan, then you are aware of the media and their love for Lebron to leave Cleveland for a bigger market where he would be more marketable.

In many interviews, Lebron mentioned his love for playing close to his home town and having his mother, girlfriend, kids, and school friends watch him play at the Q.


Chris Broussard of ESPN Magazine, said in an interview On First Take, “despite all the speculation that fans and the media want to make, he has talked to Lebron AND many people very close to Lebron, and the honest sentiment is that Lebron wants to (and is intending to) stay in Cleveland.”He also said “that Lebron has told him how he saw that the greats often set their legacy with one team (Michael, Magic, Hakeem, others) and that if the Cavaliers continue to treat him well and build around him like they have, he fully intends to continue playing here.”

“I am comfortable where I am and my family is a big part of what I do every day and being home is meaningful to me,” James said after his 50-point performance at Madison Square Garden. ”I’m happy where I am and we have a good chance to win a championship. I’m fine (playing in a small market), I perform when I get on those stages, whether I am in New York or L.A. or Chicago.”

This is all bad news for New York but you never know what might happen in two years.

What are the chances of Lebron going to New York?