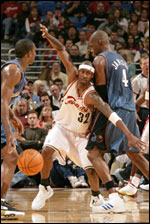 Larry Hughes sometimes publicly but more so privately been grumbling about the way he’s used, and he is upset because it isn’t the situation he thought he was signing up for when he left the Washington Wizards.

At some point in the foreseeable future, the Cleveland Cavaliers probably are going to have to make a major trade because they are not maximizing the potential in their pieces. The way things look, the guy most likely to go is guard Larry Hughes, who is not happy on this team.

Hughes averaging his fewest points in four seasons and shooting just 40 percent. He has turned primarily into a jump shooter. Beacon Journal

552 replies on “Hughes might be on the trading block”