The past two seasons, Gooden has been showing fans his “artisitc” side. Two years ago, he grew a ducktail. Then last year, there was this beard contest between him and DeShawn Stevenson to see which one could go the longest without cutting it.

Now come the new beard. I don’t know how to explain it so I will let Drew give you an idea:

“Sometimes you’ve got to sacrifice your good looks.”

“As beards go, it has to rank among the best we’ve ever had around here.” Mike Downey from the ChicagoTribune said.

“Honestly, it is up there with Honest Abe Lincoln’s … and Papa Hemingway’s white one … or Rick Sutcliffe’s red scrub brush … or Matt Clement’s billy-goat goatee … or Bobby Jenks’ blond chin strip … or Kyle Orton at his grizzliest. It is a wizard’s whiskers, mystical and fanciful and (best of all, if ever a wiz there was) three-pointed.” 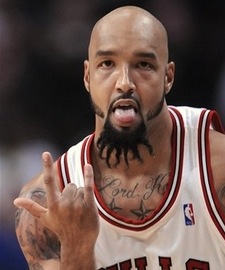