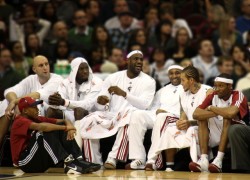 The Cavaliers started the game with 13 points lead and coasted home from there. By half time, they were up by 34-points, the biggest lead in franchise history.

“We want to come out and win every game,” asserted James. “Right now we are playing the best basketball we’e played in a long time. We have to continue this hunger and showcase our talent every time we go out.”

J.J. Hickson played career-high 31 minutes and finished with a career-high 14 points and game-high four blocked shots off the bench.

“Most teams go through some sort of hot streak during the course of a season, but the depth of domination the Cavaliers are displaying these days is getting historic.” The Cavaliers beat reporter Brian Windhorst said.

“It just goes to show how well equipped this team is, how focused we are night in and night out,” Mo Williams said. “Even the rookies have come in and played really well.”

684 replies on “Cavaliers Blow Out Thunder”