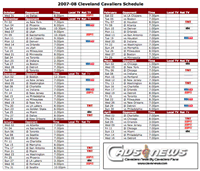 The Cavaliers will open the 2007-08 season at the Q October 31 in a nationally-televised game against the Dallas Mavericks. (Download Schedule)

The Cavaliers will then play host to the New York Knicks before heading out West for a six-game stretch from Nov. 4-12 with games at Phoenix, Golden State, Utah, Sacramento, the L.A. Clippers and Denver.

The local television broadcast schedule on FSN Ohio and simulcasts scheduled for WUAB TV will be announced at a later date. All games will be broadcast on WTAM Radio.