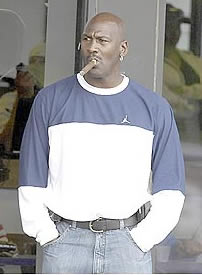 Jordan had a one-on-one interview with the Chicago Tribune before his Jordan Suzuki motorcycle racing team took the race track. The interview took on a wide range of topics including Lebron James, Kobe, Scottie Pippen, and his new team, the Bobcats.

“On the ascendance of Cleveland and LeBron James:

“On whether James made ‘The Leap’:
He showed signs. Making “The Leap” is where you do it every single night. It’s expected of you, and you do it. That, to me, is “The Leap.” Not one game, not two games. It’s consistent. Every defense comes in and they focus on you and you still impact the game. I think he’s shown signs of that. I think he’s going to continue to grow with that. The test is going to come for him to consistently do that every single night, when everybody expects it. And he expects it of himself. But he took a big step in that right direction in this last series. This next series is going to say, “How far do you want to take it?”
You can read the full article here.