LeBron James took another step in improving his game last week, undergoing Lasik eye surgery in Beverly Hills, Calif.
The procedure, performed by Dr. Kerry K. Assil, is designed to improve vision and assures a faster recovery. James’ vision has improved to 20/15, according to Assil, and he has already been cleared to resume workouts.
Lasik, which typically takes 10 to 15 minutes, involves a surgeon creating a corneal flap. The flap is then peeled back and a laser is used to reshape the cornea. Once the cornea is reshaped, light rays coming into the eye will properly focus on the retina for clear vision.Â
James Â is scheduled to host the season premiere of NBC’s Saturday Night Live on Sept.Â¤29.Â Â  The Cavaliers open training camp On Oct. 2nd,Â  inÂ defense of their Eastern Conference championship.

Former Cleveland Cavaliers owner Ted Stepien, whose propensity for trading away draft picks resulted in an NBA rule change, died Monday at his home in Willoughby Hills, Ohio. He was 82.
Stepien paid $2 million for 37 per cent of the Cavaliers in April 1980 and soon became the majority shareholder. The Cavaliers went 66-180, dropped to the bottom of the league in attendance and lost $15 million during Stepien’s three years of ownership.
He went through six coaches during that span, including four during the 1981-82 season – Don Delaney, Bob Kloppenburg, Chuck Daly and Bill Musselman. The team finished 15-67.
Because of his habit of trading draft picks for mediocre players, the league passed the “Stepien Rule,” which restricts teams from dealing future first-round selections in consecutive years.
Stepien sold the team to George and Gordon Gund for $20 million in 1983. NBA owners awarded the Cavaliers bonus first-round picks for each year from 1983-86 to help compensate for the ones Stepien traded away.
“I don’t feel I failed,” Stepien later said. “I rescued a bankrupt organization.”
After selling the Cavaliers, Stepien owned several minor league basketball teams, including the Toronto Tornadoes and the Mississippi Coast (Biloxi) Jets.
“The Cavaliers organization extends our sympathies to the Stepien family as they deal with the passing of Ted,” the team said in a statement.

LeBron James continually redefines what one player is capable of in this predominantly team sport. His abuse of Orlando, New Jersey and Detroit last spring was truly an effort worthy of the ‘Witness’ signs that dominate the landscape at the Quicken Loans Arena.Â Â
All kidding aside, though, the Cavs as a team caught a lot of people off guard last year and it is somewhat troubling how little they’ve done this off-season to try and build on that momentum. Their on-again-off-again pursuit of the Kings’ Mike Bibby makes a lot of sense from the perspective of Bibby being the perfect compliment to the way the Cavs use James, giving him the primary ball-handling responsibilities and letting the point guard act as more of a finisher. However, if the cost for Bibby is Drew Gooden, then it is a price the Cavs cannot pay. As trendy as Anderson Varejao is these days, he is no where near as well-rounded a player as Gooden, and the Cavs are far better off with the depth they have now up front than importing a potentially over-the-hill point guard that makes such an insane amount of money.
What this team could still use, though, is some depth. Donyell Marshall and Damon Jones have hardly panned out for this team since they signed on and Shannon Brown didn’t show a ton last season to make anyone think of him as a primary backup on a Finals team. While money is tight for this team right now, they have to learn to exploit their status as a title contender in the way that San Antonio, Phoenix and even Boston do and get some title-hungry vets on the cheap. The trick here isn’t trying to maintain their position in the East so much as it is trying to make sure up-and-comers don’t leapfrog them before they’ve had their day in the sun.
The fact is that this team still needs LeBron James to be superhuman each and every game in the postseason to have a shot at winning just about every series. With his summer commitments to Team USA and – ideally – many more long playoff runs in the future, the physical toll this could exact on James could knock him out before his time. A gift like LeBron is not one to be feasted on ravenously, it is one to be savored and accented and drawn-out for as long as possible.
Make no mistake, James is this team’s meal ticket, and if he ever catches wise to the fact that they are just wearing him out instead of complimenting him then all of those never-ending rumors detailing his exit strategy from Ohio may prove to be not so far off the mark after all.

One of the growing trends is so-called paperless tickets. (“So-called” because there’s still paper involved; just far less.) Last week, the IATA (International Air Transport Association) — which represents more than 240 airlines comprising 94 percent of international scheduled air traffic — said that it would stop issuing paper tickets come May 31, 2008.
On a related note, CavsNews reportedÂ  a story on Flash Seats, which is pushing electronic tickets to concerts, sporting events, and the like.
It works similarly to the e-tickets for airlines: When you order your tickets online, the order is associated with your credit card or identification.Â Â And when it’s time to go to the game or show, you don’t scour the house for the tickets or stand in line at will call; you swipe your credit card or driver’s license as you go in.Â  In turn, you get a paper guide telling you where your seats are.
In case your card isn’t read, “venue officials verify the person’s identity by asking agreed-upon security questions, such as mother’s maiden name or first pet’s name.”
The Cleveland Cavaliers gave the system a spin last season.Â  Participation was voluntary. About 17 percent of season ticket holders used the system last season, a portion that [increased] to 50 percent during the club’s playoff run into the NBA Finals.
In addition to reducing paper waste, the system means potentially better control and security.Â  Team officials say they would like to maintain greater control to improve security, to prevent counterfeiting, and to reclaim some of the money that is going to third-party resellers such as eBay, StubHub, RazorGator, and AceTicket.
From an end-user perspective, though, you do lose some convenience. Rather than being able to give tickets to friends so they can meet you at a show later, you have to go through the steps of having the electronic tickets transferred to their names, or else be sure that everyone arrives on time to go in together.
Source:Â  INFOWORLD

If you are eager to start the NBA basketball season and beat the Spurs, then you might want to download NBA Live 08.

The demo which is available to download at the Xbox Live marketplace lets users play as the Cleveland Cavaliers or San Antonio Spurs.

The full version is scheduled for release on October 2nd. 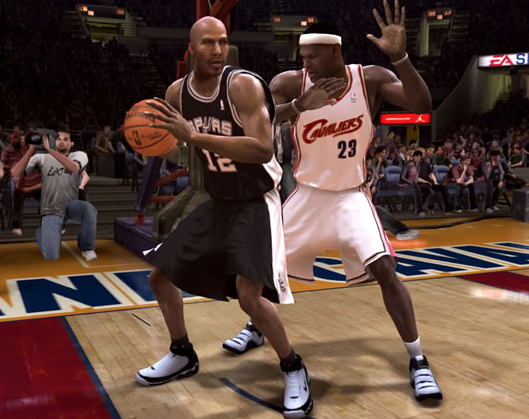 Perhaps the biggest development in the FIBA Americas TournamentÂ  was the excellent jump shooting provided by LeBron James: 76 percent from the field and 23-for-37 from behind the arc. He capped things off by hitting eight 3-pointers against Argentina in the gold-medal game, powering the U.S. to a 118-81 victory.
James obviously wasnâ€™t content with his 2006-07 performance.Â  He started working heavily on his jump shot during last yearâ€™s playoffs, when it became apparent that nobody other than Daniel Gibson was able to connect from outside. Then he spent hours in the gym this summer with Cavaliers director of development Chris Jent. It appears those hours have paid off.
But is it enough? Cleveland hasnâ€™t done anything to improve last yearâ€™s roster — not even a draft pick to speak of. Coach Mike Brown didnâ€™t impress during the postseason with his conservative approach, and other teams in the East — Hello, Boston! — are threatening to overtake the Cavs in the standings.
King James will have to find even more areas to improve on if his team has any hope of winning the title at 8-1. How about those free throws?

Â The University of Akronâ€™s Rhodes Arena will be home to the Cavaliers Wine & Gold Scrimmage. The intra-squad scrimmage will be on Friday, October 5th at 7:00 p.m. and is free to the public with an entrance voucher.

Beginning Sunday, September 9th, vouchers (limit of four per person) will be available at participating northeast Ohio Alltel locations throughout Cleveland, Akron and Canton.Â  Although the scrimmage is open to fans of all ages, only those 18 years or older may pick up vouchers.

LeBron James led an All-Star team to victory over Team Argentina 118-81 on Sunday with 31 points.

LeBron shot an impressive 11-for-15 from the field, including a sparkling 8-for-11 from behind the arc. Dwight Howard hit all seven of his shot attempts en route to 20 points, and Carmelo Anthony wrapped added 16.