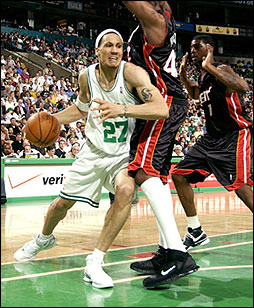 The Cleveland Cavaliers today have extended the contract of long-time radio announcer Joe Tait through the 2008-09 season.Tait is entering his 35th season as the voice of the Cavaliers, including the last 13 years for WTAM-AM handling both play-by-play and color commentary.Â

The Cavaliers fired their TV play-by-play announcer of 12 years, Michael Reghi, in the off-season and replaced him with Detroit Pistons broadcaster Fred McLeod.Â

The organization has tinkered with nearly every aspect of game presentation since Dan Gilbert became owner in 2005. But Tait and his trademark “Wham with the right hand!” have remained.Â

Gilbert says the job belongs to Tait for as long as he wants it.

The hottest item in the Cavaliers Team Shop featuring the sultry Cavalier Girls dance team is back again this season! The Cavalier Girls Swimsuit Calendar that emerged as a fan favorite is turning up the heat with their 2006-2007 Swimsuit Calendar. The 14-month calendar (November 2006 â€“ December 2007) features a sizzling collection of the ladies posing at a home along the shores of Lake Erie and a beautiful home in Pepper Pike.

Before the calendar goes to print, thereâ€™s one more hot shot that needs to be chosen. Fans can cast their votes for who will be the cover girl that represents the beauties that continue to make a splash as one of the elite dance teams in the NBA.

Officials at The Q today announced that effective immediately, no smoking will be permitted anywhere inside the arena. Prior to this move, the arena allowed smoking in Gordon’s Sports Bar and Bridges Restaurant.

“This was something we looked at closely and decided was the right thing for us to do considering the feedback we’ve received from our customers,” said Cavaliers and Quicken Loans Arena CEO Mark Stornes in a statement.

For those visitors who just canâ€™t make it through an event without a smoke, officials at The Q have established four designated smoking areas on the outside of the building. Those areas are equipped with televisions so visitors can continue to watch the game or event.

The Desert News.Com is reporting that “Around this time last year, the Jazz were giddy about the tip-top shape in which big-man Carlos Boozer reported to training camp.
Â Â Â Â Â  Boozer gloated, too.
Â  Â  Â  By the end of the first week, however, the would-be front-line starter was down and out with a bad hamstring â€” an injury that kept him from playing until February.
Â  Â  Â  Now, during the Jazz’s opening week of their 2006 camp at Boise State University, reviews on Boozer’s conditioning have registered rave yet again â€” from franchise officials and Boozer himself.
Â  Â  Â  “His conditioning,” Jazz coach Jerry Sloan, “is better, probably, than what it was a year ago.”
Â  Â  Â  Boozer went so far as to say he feels “definitely better” than he did when camp got under way last year: “I feel great,” the 24-year-old said. “Hamstrings are terrific. Every part of my body is terrific.”
Â  Â  Â  Yet there are hints of potential cause for pause on Sloan’s part.
Â  Â  Â  “He may be just a little bit cautious at times now,” the Jazz coach said mid-week.
Â  Â  Â  “I’m sure probably in the back of his mind there’s probably some things like that going on with it,” Sloan added after a Friday-night scrimmage in which Boozer scored nine points on an efficient 4-of-6 shooting from the field â€” not exactly dominating but not shying away from the action either. “But it’s still early.”
Â  Â  Â  Perhaps the tentativeness is because Boozer does not want to miss 49 games to start the season, as he did last year.
Â  Â  Â  Perhaps it’s because he wants to play more than 51 games this year, something he has not done since he was playing for the Cleveland Cavaliers during the 2003-04 season â€” his second in the NBA out of Duke.
Â  Â  Â  In any event, Sloan seems to hope it’s only because camp is still just a few days old: “Maybe (it’s) to start out with,” he said, “until he gets his feet under him.”
Â  Â  Â  Sloan can’t be sure â€” but refuses to rush pursuit of the answer, even though he also says, “We need Boozer to get on top of his game.”
Â  Â  Â  Instead, he’d much rather trust trainer Gary Briggs to tell him if there ever is anything physically wrong with Boozer â€” or any player, for that matter.
Â  Â  Â  “I don’t run to them and (ask), ‘Are you doing OK?”” Sloan said. “Because sometimes you feel like if you ask them you kind of jinx them or something.”
Â  Â  Â  Boozer, for his part, went into camp maintaining he has no fears of a setback similar to 2005 â€” when his body broke down despite ample offseason work.
Â  Â  Â  The reason, he said early in the week, stems from a different training regimen he endured this past summer.
Â  Â  Â  According to Boozer, he spent an hour each weekday running and a few hours afterward playing pickup ball near his summer home in Miami. That’s much more work on the track, and on the court, than the previous summer.
Â  Â  Â  The result: At 265 pounds with 4.8 percent body fat, the Alaska native said he feels much lighter than in 2005.
Â  Â  Â  Boozer said he also received massage treatment once or twice each week, “so I don’t have more muscle problems.”
Â  Â  Â  As for the suggestion from Sloan that he has played somewhat cautiously during the week, Boozer conceded Friday that that’s indeed the case.
Â  Â  Â  It’s not just a subconscious happenstance, either.
Â  Â  Â  “I went very hard,” he said with two-a-day camp workouts now a thing of the past. “But, at the same time, I wanted to make sure I didn’t do anything to jeopardize my health. Which is smart. Absolutely.
Â  Â  Â  “It’s just one of those things where you want to be aware,” Boozer added. “I’m aware of my body more than ever now.”

The eyes of the sporting world will be on an Ishpeming product when the National Basketball Association, NBA, season tips off.

Employees at Robbins Sports Surfaces have just completed a new court for the Cleveland Cavaliers. It took about three weeks to put the finishing touches on the floor that’s composed of 240 hardwood maple panels.

Hand painting makes it a 116-foot long work of art and something to watch for even if you’re not a basketball fan.

The floor is scheduled to be shipped on Friday, set up in Cleveland on Saturday, and see its first action on Sunday.

A 53-point win over South Korea wrapped up a perfect Asian exhibition tour for a star-studded U.S. team on its way to the world-championship tournament.LeBron James of the Cleveland Cavaliers scored 23 points Tuesday to lead the Americans to a 116-63 rout of South Korea in their final tuneup. The U.S. team, which went 5-0 in exhibitions leading up to the worlds, plays Puerto Rico on Saturday in Sapporo, Japan.

“We were a little sluggish at first and I was able to pick up my energy level and the guys followed,” James said. “We got better as the game went on and took care of business.”

With Carmelo Anthony back at full strength, the United States had little trouble with Lithuania.Â  Anthony, who hyperextended his knee and left in the second quarter of a victory over Brazil last week, scored 19 points Sunday as the United States cruised past Lithuania, 111-88, in a tuneup for the world championships.
Anthony set the tone early with a slam dunk in the opening minutes that drew a huge ovation from the crowd, and LeBron James closed out the first half with a three-point shot just before the buzzer to give the U.S. a 56-32 lead at the break.
Early in the final quarter, James brought the crowd to its feet with a one-handed dunk that made it 87-55.Â  The Cleveland Cavaliers star gave the Americans a 108-78 advantage with another jam with two minutes left.