While browsing the Internet today, I came a cross this banner of the LeBrons. I must say, Nike getting really creative and this banner caught my attention.Â  Point your mouse over the flash banner below and you will be able to point a click on four different points on the shoes. A menu will come upÂ  with Nike’s technical explanation and then one of the LeBron’s will give you his explanationâ€¦

Â Tune in to CNBC tonight as the world’s greatest investor, Warren Buffett, shares his thoughts on LeBron and LeBron does the same about Warren.

Yeah, the Cleveland Cavaliers had their five-game winning streak come to an end, but it’s still early in the season.

LeBron James and company were outdueled by the Washington Wizards on Saturday night by a 111-99 score. Gilbert Arenas looked more like the Nike commercial star rather than James, dropping in 45 points. The Cavs were burned by Arenas, who made 14-of-22 shots, including 7-of-11 on three-pointers.

It was the most points the Cavs have given up this season and only the second time they’ve allowed more than 100. The Cavaliers were playing their second game without starting guard Larry Hughes, who is out with an injured ankle.

But it’s not time to panic yet for the Cavs and their beloved fans.

Even though rooting for the Browns is like chewing on tin foil with fillings in your teeth, the Cavaliers have the best chance of bringing home the city’s first championship in a long time.

The Cavaliers are 7-3 this season and own a two-game lead over the rival Detroit Pistons in the Central division. Cleveland will hit the hardwood again on Tuesday versus Memphis before hitting the road against Toronto and Indiana

Have you noticed Lebron Jamesâ€™s new free throw routine? Heâ€™s been kissing the inside of his wrists before attempting free throws. It is a new act he developed after struggling at the line in the first week of the season.According to Brian Windhorst, James has tattoos on his wrists with the names of his mother, Gloria, and his longtime girlfriend, Savannah Brinson, on them. It seems to be working. Over the past four games, James is 41-of-51 (80 percent) at the line.

Larry HughesÂ received a MRI and examination Thursday at The Cleveland Clinic with Dr. Richard Parker, head team physician. It revealed a high right ankle sprain. Larry will undergo treatment over the next several days. Pavlovic might get the starting position.

This is a funny one promoting Zoom IV.

This is my favorite commercial.Â The commercial shows LeBron James in his first NBA game. LeBron freezes after receiving the ball. You will also see Boozer and Djob back in their Cavaliers outfit. 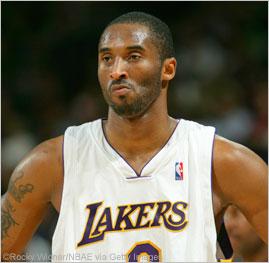 Kobe Bryant is being sued by an Arkansas man, who claims the Los Angeles Lakers star deliberately elbowed him during a Memphis Grizzlies’ game last year.
Bill Geeslin sat in the stands when the Lakers played in Memphis last Nov. 14. His three-page federal lawsuit filed on Tuesday claims Bryant came off the court during play, landed on Geeslin and “without provocation” committed assault and battery when he struck Geeslin with his elbow.

Geeslin seeks more than $75,000 in damages for unspecified injuries that required medical attention.